YCEE Sets to Fill The O2 Academy For Juice Concert 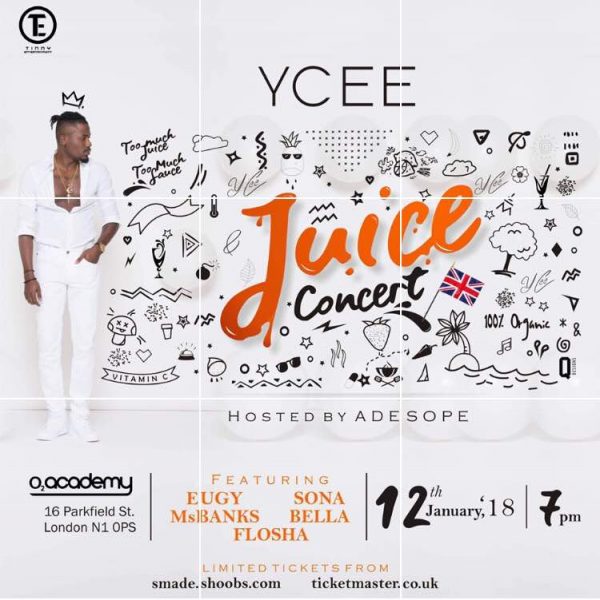 Tinny Entertainment’s Oludemilade Alejo, also known as YCEE had an amazing 2017. Welcoming the year with the release of his 8 track most anticipated Ep “FirstWave Ep” which was released on the 7th of April, 2017. The Ep featured some other acts i.e Reekado Banks, Falz and the seductive harmonic complexity of “Juice”, featuring Maleek Berry. The official video for “JUICE” has over 14 Million Views on YCEE’s youtube.

With “Juice” by YCEE maintaining the spot as one of the biggest song in africa and beyond. He has decided to hit london with “JUICE Concert”. The concert will be YCEE’s first official headlining concert since he’s been in the music industry. The event packaged by Tinny Entertainment and Smade will be holding on the 12th of January, 2018 at the “O2 Academy” 16, Parkfield St. London N1 OPS. With lit performances from YCEE’s label mate, Bella Alubo, Sona, Eugy, Ms Banks and Flosha. Hosted by Beat FM Oap, Shopsydoo.