According to Vector, rap music is usually unique to a people as it tends to focus on their history, experiences, culture, and tradition.

He told the News Agency of Nigeria (NAN) in Lagos on Friday that rappers owed the listening public the responsibility to produce good music for their listening pleasure.

“The purity of Hip-Hop is dependent on the person doing it. A Frenchman can only do Hip-Hop in a pure French form, so somebody who is doing Hip-Hop right now can only do, like me I’m only doing Hip-Hop how I know how to do Hip-Hop. Is it pure? To me, yes.

I think we need to just at this point, try to understand more because people who understand, for example, Dialect Rap, right, to them people who rap in English are pretty much, ‘abeg I no hear wetin you dey talk.

Likewise the reverse, I think at this point we should just try and accommodate each other’s definitions of what purity is and that way we will grow. We should stop trying to measure our rap here by American standards or anything, it’s just pretty much if you can rap, rap. How do you know how to rap, if it’s Yoruba do it well, if it’s Igbo do it well, if it’s Hausa, awesome, kill it.

…which was the main idea in the ‘King Kong’ remix, bring all the major tribes together that know how to do their rap, how they feel. Validation is not needed that’s the point, just do the art form, if your audience accepts you and you make money off it, it’s fine, that’s it, if you accept you, that’s the most important thing.

NAN reports that Vector is one of the notable contemporary rappers in the country.

He has released two albums so far, namely: State of Surprise (SOS) and Second Coming.

Vector has also produced a mix tape titled, Bar Racks – a compilation of songs he has recorded over time.

The project is intended to discover and promote new rappers in the country. 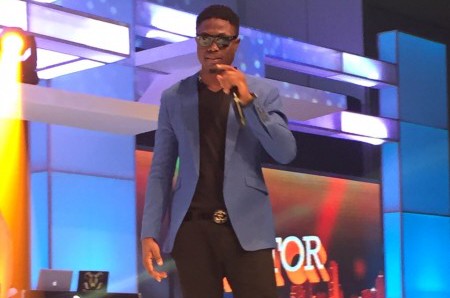