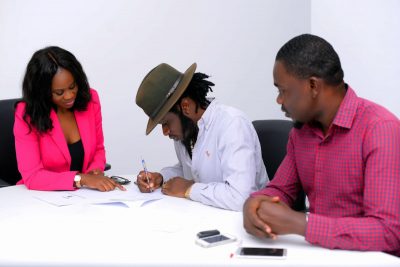 Talented singer, Bolaji Odojukan, popularly known as BOJ, seems to have signed a recording deal with HF Music, judging from the post on his @bojonthemicrophone Instagram account today with the caption, “Signed, sealed and delivered. #HFMusic X #BOJ.”
HF Music is also home to the sensational hit-maker, bigLITTLE, who featured Boj on his most recent single, “Get Down.”
Although, HF Music is yet to release an official statement about their new signing, the posted picture, which shows Boj signing his contract as two record label officials look on, speaks volumes. Label mate bigLITTLE, also reposted the same picture on instagram page @bigLITTLEofficial
Boj is an award winning Alternative Singer with a unique style and voice. He has worked with various artistes including Olamide, Seyi Shay, Falz and Wande Coal, to mention a few.
Related ItemsBOJ