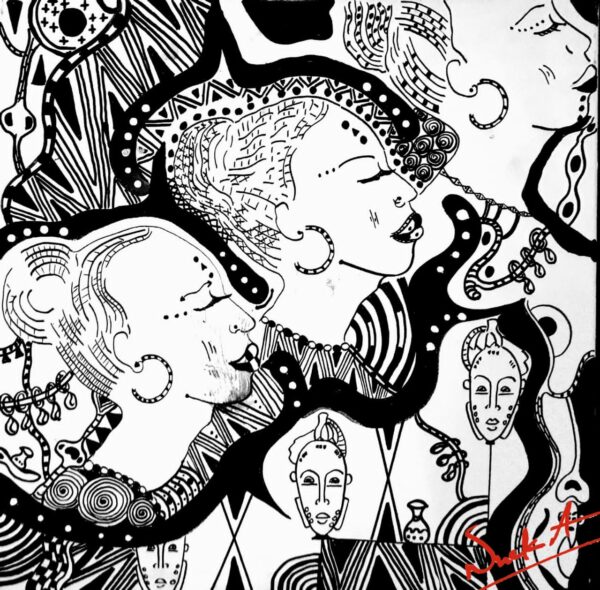 Artist, activist, singer-songwriter, scholar, survivor: Nneka Egbuna has always sought to consolidate all aspects of her identity within her compositions. Listen to any one of her three previous solo albums and you can hear this combination of conviction and courage in action, a bold creative approach that has attracted admirers and collaborators as diverse as Nas, Damian Marley, Chase & Status and Rita Ora. And yet, never have Nneka’s hopes and fears been more vividly or more compellingly rendered than on this, her powerful fourth album.

Written and recorded during lockdown, Love Supreme sees the Nigerian star charting her personal growth through the prism of electronic pop, albeit an utterly unique strain touching on neo-soul, hip hop, Afrobeat, reggae, and jazz. The results are as fascinating as they are multi-faceted, mirroring their creator perfectly. Discussing her roots over the phone from Hamburg today, Nneka jokes about withholding certain details for a future autobiography. Even abridged, her story makes for remarkable listening: a tale of endurance and determination, and of overcoming odds that most would have found insurmountable.

Hailing from Warri – in Nigeria’s Delta State – Nneka was raised under an almost militaristic regime, set out by her father and step-mother. School was her only respite from hours of household chores, while friends and music were forbidden. “We had this amazing piano in the house – left behind by my biological mother – but nobody was allowed to touch it,” she recalls matter-of-factly. Confusingly her father was a huge music fan himself, gravitating towards artists like Fela Kuti, James Brown, and John Coltrane.

It was at school that Nneka first found an outlet for creative expression, under the guise of religious worship. “In the Christian Union I could teach, I could laugh, I could sing, I could write poems. I could be with other women or girls and just be creative with them, you know?” And when, at the age of 17, an opportunity arose for Nneka to fly to Germany to meet her biological mother for the first time, she jumped at the chance to escape her oppressive home life.

The trip was short-lived, with Nneka being deported after a couple of months despite being half-German, but four years later she returned to Hamburg as an asylum seeker, with the intention of settling there permanently. She was taken in by nuns at a shelter which offered free accommodation for migrants under three conditions: that they took therapy, learned German, and pursued a hobby. Nneka’s hobby was guitar, an interest she nurtured in sessions with the other inhabitants at the shelter, who introduced her to hip hop.

Her first project-proper was The Chosen Few, a hip hop group formed by friends from Haiti and Jamaica. Encouraged by the group’s leader, Nneka began writing lyrics. “The whole thing suddenly sunk in,” she explains. “It was like: you have your language already, so go open your mouth and express it. And [my songwriting] developed from there.”

Shortly after leaving the group, she met her long-term collaborator DJ Farhot through a mutual acquaintance. Though both relative novices, they figured out production together, and began writing and recording demos. Nneka took several of these to the management division of Hamburg-indie label Yo Mama Records, Mutter ist die Beste, which translates from German as “mother is supreme”: the exact same meaning of Nneka in Igbo.

“I just walked up to their office, without an appointment, and [my now-manager] said, ‘Maybe you’d like to listen to my music?’ And that’s what happened. He listened from the beginning to the end and asked to come to a show.” With no real profile, the only booking she and Farhot could get was in Hamburg’s red light district. She laughs, “So my first ever show – and the place I got my record deal – was at a venue called Funky Pussy.”

From it, came her breakout single ‘Heartbeat’. Reworked by Chase & Status, the remix was later sampled by Rita Ora on her 2012-smash ‘R.I.P.’ Even more significantly, ‘Heartbeat’ was the song that brought Nneka to the attention of Nas and Damian Marley, who invited her to collaborate on their 2010 project Distant Relatives. Today, Nneka describes touring the US and Europe with the duo as an “amazing but humbling” experience, and cites their support as being invaluable to her own development as an artist. She also recalls the experience coinciding with a seismic cultural shift within the US.

“There were no Wizkids or Burna Boys back then; none of that. The play Fela! on Broadway hit New York, and that was when my album got released. And that movement was just so empowering for a lot of my African-American brothers and sisters, and for the mixed kids who grew up in Europe who did not have a connection to their African heritage. Through my music they were able to find a bridge.”

Nneka released her third LP, My Fairy Tales, in 2014, before retreating from the spotlight to focus on painting and visual arts, as well as production and artist development for her own imprint, Bushqueen Music. It’s via this label that Love Supreme is set to arrive in the spring of 2022. Though Nneka never stopped writing between albums, it was the pandemic – and specifically the enforced solitude of lockdown – that gave her the mental clarity to create this collection.

“It became about self-reflection, and seeing how connected our inner world is to the outer world. It’s no more ‘Victim of Truth’ because, no, I’m not a victim. In fact, I might be the perpetrator. Or I might be both. And that’s okay: I’m not judging myself, I have compassion.”

The period was as much about personal development as it was creative growth, as she delved into “childhood traumas, dreams, guilt trips, not feeling good enough…” as well as her faith. As she explains wryly, “You definitely need God to get through certain things.” But it was by exploring the very darkest reaches of her psyche that she finally found the light. “I learned we cannot let fear guide us. I read an amazing quote: ‘Nothing that needs to hide in the dark has any authentic power of its own.’ That’s it: just know that any darkness is not going to last long.”

It’s a message of hope that you can trace through the atmospheric electronics of ‘Yahweh’ – a prayer with drums inspired by those on Jimi Hendrix’s ‘Machine Gun’ – and the Alice Coltrane-influenced title-track. It’s there too in ‘Buckle Up’, its shimmying Afrobeats conveying an unstoppable life force. As before, much of the album’s production is handled by Nneka in collaboration with Farhot, but this time round there are contributions from French producer Mounir and Kenya’s DJ “Blinky” Bill Sellanga.

To listen is to come away with a vivid sense of Nneka’s renewed drive, and of the strength she’s taking into the next chapter of her career. Because, make no mistake, Love Supreme is a bright new beginning. And for us listeners, it’s a timely lesson in the redemptive power of self-love.