Following the several rumors surrounding the state of things with YBNL, the ‘Shoki’ crroner, confirmed via Twitter that his contract truly has expired and he will not be trenewing it.

He also confirmed that he will be leaving to float his own label, Yagi Records, with support from Baddo himself, Olamide, as family is all that matters.

Lil Kesh, like a loyal artiste he is known to be gushed about how good Olamide has been to him stating for a fact that his contract included just three videos but Olamide went out of his way to shoot 5.

Read his message below: 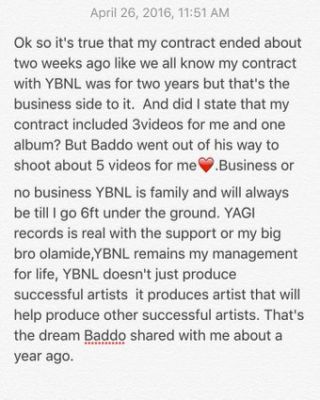