Highlife powerhouse and certified pan-African hit performer, Wizboyy serves a hot collaboration titled ‘Salambala’ featuring rap maverick Phyno. The hot number produced by WizBoyy is a stellar track as the hitmaker continues in the tradition of giving his fans “good music”. The build up for new music from WizBoyy has shown that the fans want to see more music from the multi-talented act who has remained consistent since his monstrous hit song ‘Infinity’ and commercially/critically acclaimed album ‘Testimoney.’

“Salambala” like his previous hits, will showcase why the hitmaker is a continental star. 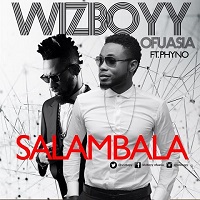