2015 has seen the rise of new acts across the African continent one of whom is South African rapper, Cassper Nyovest.

Speaking with NET at the recently held AFRIMA 2015, Cassper expressed his excitement about the numerous laurels he has been able to win in one year, his ambition and his quest to headline a concert that will fill up Nigeria’s National Stadium.

‘For a very long time, we have put American music on a very high pedestal but Nigerians were the very first to say we enjoy our kind of music and we will embrace our own and this inspired us in South Africa to do the same thing. African music has not really enjoined this kind of patronage as it does now ever since the era of the Brenda Fassies, Yvonne Chaka Chakas and many others who are pioneers of what we do today. We are just following that footstep to make history and it’s a good thing that the revolution was led by Nigerian music,’ Cassper reveals.

Cassper also disclosed his intention to one day fill up Nigeria’s national stadium in a similar feat to his recent record breaking ‘Fill up the dome’ concert in South Africa. 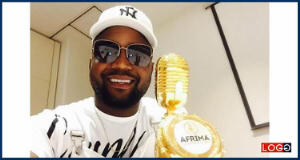