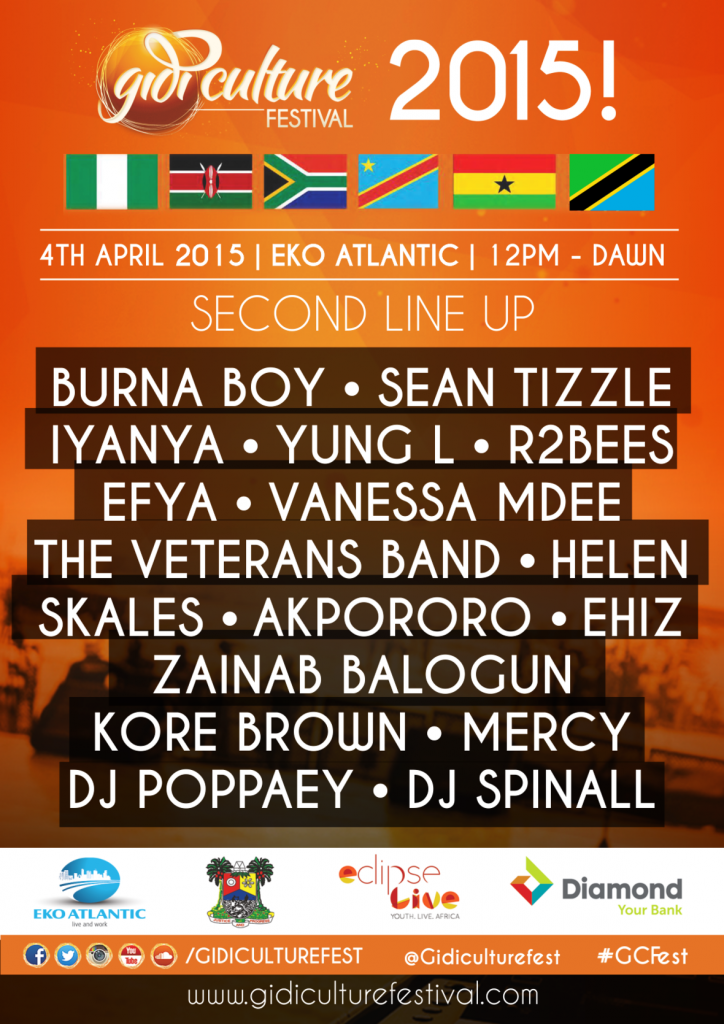 With just over two weeks to go, Eclipse Live Africa, organisers of the Gidi Culture Festival announce the final lineup of artists, hosts, comedians and DJ’s. The festival, which is happening on April 4th at Eko Atlantic, already boasts an impressive roster of African talent, daytime festivities, and partners that are working to ensure that GCFest is the can’t miss event of the year.

The first and second lineups combine to make Gidi Culture Festival Africa’s musical offerings the single biggest concert in West Africa. The festival’s daytime activities include the Fayrouz Art installation, a Volleyball tournament sponsored by Red Bull, The Melting Pot, being managed by Nylah’s Catering (www.nylahscatering.com), will offer food from all over Nigeria. GCFest will also include beach football and a Fun Zone. With Lynx*x, Fade Ogunro and Osas Ighodaro as celebrity team captains, the volleyball and football tournaments provide a chance for fans to take on their favorite celebrities. GCFest’s daytime activities and musical lineup come together to make biggest beach party this side of the Atlantic, there is simply nowhere else to be on April 4th.
Information for festivalgoers:
Use Jovago.com to book hotel rooms and get 25% off with the code ‘GCFest’
Chisco will be offering ‘Park n Ride’ services from specific locations on the island – stay tuned to gidiculturefestival.com; where specific locations will be revealed closer to the event.

Festivalgoers will have on-site Internet access to Twitter, Facebook, Snapchat and Instagram
From 2nd-5th April Eclipse Live and Easy Taxi’s Drink Responsibly Campaign assures everyone gets home safely. With code ‘GCFEST’ Easy Taxi will be offering 50% off to all who use the code
Eko Hotel is Gidi Culture Festival’s official hotel partner and Remy Martin will be providing an Artiste Lounge. For those outside of Nigeria who can’t make it to Eko Atlantic on the 4th of April, Gidi Culture Festival will be streamed live on Un1ty.

Tickets are on sale now via, GidiCultureFestival.com, as well as Diamond Bank Branches, The Diamond Bank APP and Quickteller.com. Africa’s biggest beach party is just around the corner and it is not to be missed!