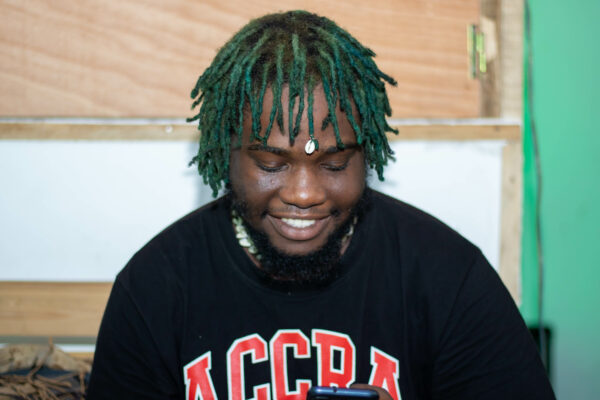 A bold pastiche of Ewe culture and modern Hip Hop, Who Is Deydzi takes a stand in his latest album ‘Mɛva do: Becoming Agbenɔxevi’

Dodzi Korsi Aveh, aka Who Is Deydzi, is paving his own way in the Ghanaian arts, telling stories through spoken word poetry, theatre, film and other visual Arts. As a child he would write his first poems and lyrics as a coping mechanism for his parents’ divorce and a crisis surrounding his identity as a Ewe person, since he was struggling with not speaking native Ewe. This coping method soon became a 9 year poetry journey and would turn into a music career. His sound incorporates his poetry background with traditional Ewe sounds, Hip Hop and Alte influences

With a Discography of 3 albums, is an emerging Ghanaian artiste who deserves recognition. On a mission to carry the torch of his elders, Who Is Deydzi reimagines the poetry (Hakpanya) of the Ghanaian Ewe people in his latest album ‘Mɛva do: Becoming Agbenɔxevi’. “This is me channelling my ancestry, and reinventing hakpanya through the voice I found in hip hop and Alte music”. Taking on a spoken word aspect, Who Is Deydzi speaks his truth over top of African inspired tracks, taking on the the figure of Agbenɔxevi: a folkloric bird/man hybrid portrayed in the literary works of great Hakpanyan poets Kofi Awoonor and Kofi Anyidoho.

The transition of this bird surviving infancy to flying high in the skies can be heard as you move through the project. Tracks like ‘400 Bars a Slaves’ emanate themes of cynicism, talking through being stuck in a simulation. ‘Hadzi Vodun Flow’ is its equal, uncovering more truths over a more modern fast paced Trap beat. Samples of live Agbadza performances are heard alongside features from fellow Hakpanyan artists Cyrusgooddays and Megborna in ‘Mɛvado’. It’s tracks like these, brimming with influences that reveal the creativity of Who Is Deydzi. The album is also structured with the same attention to detail as most poetry, and Who Is Deydzi makes sure to end the project on a high with ‘Levitate’ (feat. The Art, Marince Omario & Obiri Tete). Lyrical themes turn towards the focus on freedom while hopeful piano progressions permeate the track. As a whole, ‘Mɛva do: Becoming Agbenɔxevi’ is an all-encompassing project packed with powerful ethnic origin and promising lyricism. Widen your tastes and discover this modern look at Ghanaian roots in this upcoming album.

Who Is Deydzi has previously performed alongside Black Sherrif at Afrochella and set to perform in Accra later this year whilst he completes his Theatre Arts MA at the University of Ghana. Highly ambitious, moralistic and creative, Who Is Deydzi is one to watch in the emerging Ghanaian music scene.