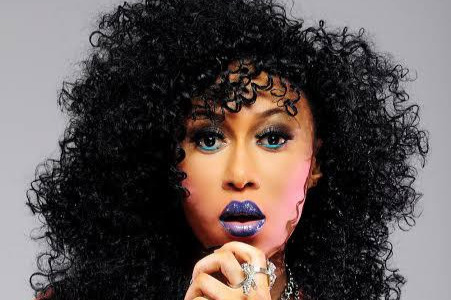 Popular Nigerian singer Cynthia Morgan has been out of the music scene for sometime after a contract crisis with her music label and worse of all, an illness that consumed all her savings.

In hibernation in Benin, 28 year-old Cynthia was interviewed Friday by UPFRONT WITH SANDRA. And she poured her heart out to her like she did in March to Sydney Shocker on ‘LunchTime Friday’

In the latest Instagram Live chat with Sandra, she spoke about her illness, which was not drug related. She spoke on why she relocated to Benin to recuperate and save costs and how she fell into depression after she found her resources drained.

She shared her pains and her embarrassment, the reasons she is hiding in Benin. Now Sandra Ogbebor who interviewed her is marshalling efforts to relaunch Cynthia’s music career. Sandra has launched a GoFundMe campaign for Cynthia. The target is $150,000.

“We have decided to set up this gofundme to appeal to her fans to please contribute in bringing her back on the scene”, Sandra wrote on Saturday. “She has unreleased fire hits that we can’t wait to share with the world.

“The truth is, she has remained the undisputed queen of dance hall in Nigeria and we need her back”, Sandra added in the appeal to donors. Cynthia Ikponmwenosa Morgan has adopted a new social media name and stage name, Madrina.

The “German Juice” songstress who crossed over from pop had thrilled her fans with a number of hit songs. For several years, she was crowned the queen of reggae dancehall music.

She was signed to Jude Okoye led North Side INC The energetic singer’s career appeared to begin to take a nosedive in 2015 following the release of her single, “Simatiniya.”

She told Sydney Shocker that although she tried to get back into the studio, it just really didn’t and this affected her career negatively.

‘Its been like a roller coaster for me. I took ill, I was really sick. When I changed my name, I had a lot of family issues. I had like a breakdown. So it was really hard for me…I actually went back to the studio but I wasn’t done, I still had to come back,” she said.

Watch the video below:

With what Cynthia Morgan is saying about Jude on IG live right now it's safe to say P-SQUARE broke up because of him. She doesn't even have access to her veevo account and she's not getting a loyalty at all. This is terrible#bringbackcynthiamorgan

Cynthia Morgan had issues with her Record Label (Owned by PSquare brother – Jude Okoye), She lost all royalty, She lost her stage name which is her real name, Her Instagram account, she doesn’t even have access to her VEVO account anymore.

She’s now a shadow of herself. pic.twitter.com/5h7zocSUDX

Life is not Ur friend. Never be too comfortable with it. U can't predict it & its never to be understood. Just pray, live & make the most from your opportunities. Cynthia Morgan is a living proof… I pray she bounces back & recovers 4rm what Jude did to her. pic.twitter.com/UwJWPJRzdt