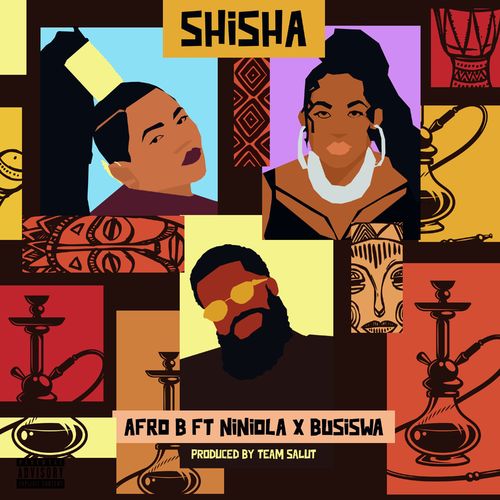 UK-based Ivorian Afrobeats artiste Afro B known for his hit song, “Drogba (Joanna)” is back with a sensational new direction to his music — this time an epic fusion of hip-hop, dancehall, and Afrobeat melodies in one musical pot: ”Shisha” featuring AfroHouse queen, Niniola and South African House singer-songwriter and poet, Busiswa.

Produced by Team Salut, recorded at their studios in London, distributed by Believe, and mixed by Trehy Harris, “Shisha” according to the ingenious talent, “is an Amapiano styled track, with a slight UK Funky house vibe. This is the South African sound that’s currently taking the world by storm and I believe I gravitate towards a great deal due to the love I had for UK funky house, both sounds have similar elements. I’ve teamed up with Nigeria’s finest Niniola and South Africa’s very own Busiswa; I knew they would be both perfect for this project. Of course, Team Salut with their amazing production brought everything to life. This is the perfect come back and dancefloor African song.”

Afro B knows better than anyone that there’s no expiration tag on a vibe, especially when the music ignites a new moment every time it reaches new borders and ‘Shisha’ is an echo of this truth. With its pulsating rhythm curated by Afro B himself, catchy lyrics from Niniola and Busiswa who bring their individual exclusive uniqueness to this track, creating a colourful harmony that boasts of pure music ingenuity, ‘Shisha’ is a must-listen! Already tapped to be a song that will dominate the music festival themes this year-end, ‘Shisha’ is that tune that represents a beautiful fusion of the sweet sounds of the African culture Afro B loves passionately.

The British DJ, singer and songwriter known for his hit song “Drogba”, which peaked at number 23 on the US Billboard R&B/Hip-Hop Airplay chart and led to the creation of the “Drogba Challenge”, is the working moniker of rapper, singer, songwriter, producer, and former DJ who has successfully worked his signature meld of electronic dance music, hip hop, Afro-pop, reggaeton, Afrobeat, and dancehall into what he terms “AfroWave”, which is quickly creating new dynamics for his music — becoming an evolving African movement.