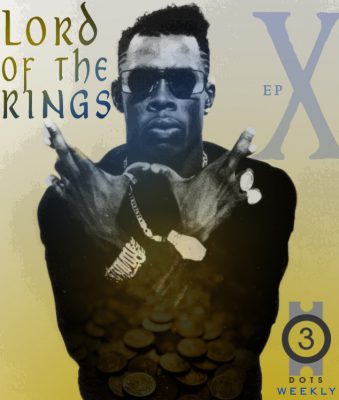 Title: Lord of the Rings

⚪: When wizkid started to work with foreign artists, I assumed he was going for international appeal, but I was obviously wrong.

?: As a Nigerian music lover, I really don’t find this song appealing, mostly because I don’t hear a Nigerian sound while I’m listening to it…

?: & then featuring the most washed up American artists!

?: Still not gotten over Riri?…

⚪: One of those rappers hip-hop can do without?…

?: Now tell me who’s going to help whose career???

?: This song is lit throughout out,

?: Miss harmony did a good job but was still my least favorite performer.

⚪: It seems like the presence of rayce on a song inspires other artists to perform better, vector was better than he usually is.

?: It’s a big wonder why dj’s feel like their voice have to be on the song.  Dj’s incase u don’t realize voicing or singing is not your job, let the singers, rappers & vocalists do their thing. There is a reason why you’re not a singers but a dj & that doesn’t make you less of a musician than others.

?: Shout out to dj’s that have sense…

Your loving by Jesse jags

?: This is a very mellow song by Jesse jags. His composure and flow is second to none… His music is a proper representation of what Nigerian music should be.

⚪: This man can compose a song to incite a feeling on d listener. This song is a reminiscent of “Sex and scotch”

?: He’s a brilliant song writer & musician. I think more people should listen to his type of music…

?: This is a very good combination of singer and producer, they are both very talented and don’t have a problem showing it off. They’re capable of making music that’s exciting to listen to.

?: But! The issue with these guys is that, there’s no evolution going on with them, & it’s getting boring, like they have a template for party songs.

⚪: They should find new sound, new flow & new challenges. Olamide is who he is because he has tried himself on every style of music he can lay his hands on…

No kissing by Patoranking ft Sarkodie

?: This song has a groove I like. I could bob to this beat all day, it’s nicely done.

⚪: These are some of my favorite guys in the music industry.  I like the fact that they consistently put in their best into music & even though this song sounds a lot like “my woman, my everything”, I can’t help but feel like this feature is not random but actually deliberate…

?: Pathoranking’s level of diversity must definitely be tested, I’d like to see him move further from his comfort Zone…

⚪: He will have to evolve gradually, so as not to lose himself… Patience red dot.